The Wade Saddle was also developed in the late 1800’s but by an unknown saddle maker.  The original saddle was passed from father, Aron Wade, to son, Clifford Wade, and then copied by Hamley’s, in Oregon, in 1937 at the request of Clifford Wade.  Tom Dorrance, a friend of Clifford’s and admirer of his saddle, had Hamley modify the original design to his own specifications and in 1940 the Wade, as we know it today, was born.  The saddle was popularized in large part by the Dorrance brothers and their protégé Ray Hunt.  The Wade has a much larger horn than the Visalia which is easier on a rawhide riata than the smaller Visalia horn. 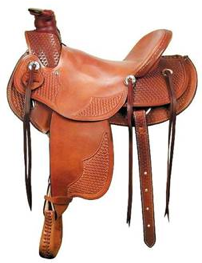