The two rein is an intermediate step between starting training in the Jaquima and becoming a finished Bridle Horse.   The two rein requires using two communication devices to signal the horse.  While the bosal continues to be used a bridle and spade bit are added as further communication devices.  This is only done after the horse has had some time to carry the bit around and get used to the way it feels in his mouth.  Sometimes this is done by isolating the horse with nothing but the bridle and sometimes over the bosal while it is being ridden.

When the horse gets to rolling the cricket, a form of roller, in its mouth that is a sure sign they are feeling comfortable with the bit.  Some Vaqueros will use a smaller bosal called a bosalita (or under bridle) while working the two-rein.  The bosalita, or a thinner bosal fits underneath the bridle and does not interfere with the function of the spade bit.

Initially, even though the horse is carrying the spade bit, the Jaquima is still used as the primary line of communication through the mecate rein.  Gradually use of the Jaquima is replaced by picking up on the spade bit.  There are of course two very separate sets of reins the mecate reins attached to the bosal and the romel reins attached to the spade.   Romel reins are traditionally made from braided rawhide.

There is a great deal of skill and “feel” used to switch between the two sets of reins in preparation for the horse to become a true bridle horse and dependent on only the romel reins for signal.   The process of making a bridle horse takes many years and is not for the faint of heart or people trying to get somewhere in a hurry.  Nonetheless, the results are amazing.   During the horse’s lifetime the Vaquero may switch back and forth between the bosal and the spade many times.  Martin Black explained that in his view a horse is never truly finished. 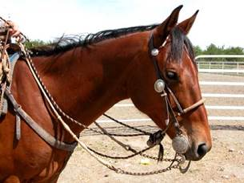