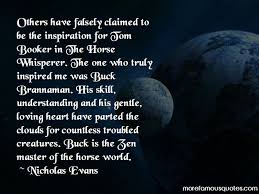 Who exactly is “the horse whisperer”?  Is there, or perhaps more correctly, was there only ever one horse whisperer?  Depends a lot on who you talk to and how big their ego is.  Monty Roberts laid claim to be the horse whisperer of the movie (“The Horse Whisperer”) fame.  However, that notion was counter-punched by Buck Brannaman, supported by Nick Evans the author of the book, who proclaimed that it was Buck.

Tom and Bill Dorrance are widely regarded as the fathers of so called “natural horsemanship, a term coined by Pat Parelli.  Tom & Bill grew out of the Vaquero traditions of the great basin area both incredible horsemen with Bill being more noteworthy for his abilities with the reata and Tom for his leadership in horsemanship.

It is doubtful that the Dorrance brothers were the only great Vaquero style horsemen around during the 1940s and onward, but they were certainly well known and highly respected among their peers.  Ray Hunt, a student of Tom Dorrance, probably achieved the most notoriety by hitting the clinic circuit hard and his professions of being the “horses’ lawyer”.

Buck Brannaman, is the protégé of Ray and has been able to build on what Ray started and expand his reach through more progressive communication mediums, the internet, movie (The Horse Whisperer), books, DVDs and even branded gear.  Buck has brought the Vaquero traditions to the modern world in a way that perhaps no one has ever done or been able to do before.

Although undoubtedly proud to wear such an esteemed moniker, is Buck really the one and only horse whisperer?  I tend to think not.   There are many great horsemen promoting the art of the Vaquero, the journey from Jaquima to Freno and all the cowboy nuances in between.  Many trained directly under Tom & Bill Dorrance and/or Ray Hunt.  We might think of such luminaries as Martin Black, Bryan Neubert and Buster McLaury amongst many others.

Perhaps all of seekers of the soft feel, who are able to communicate silently and consistently with our horses, without a heavy reliance on our aids, are in some measure horse whisperers.