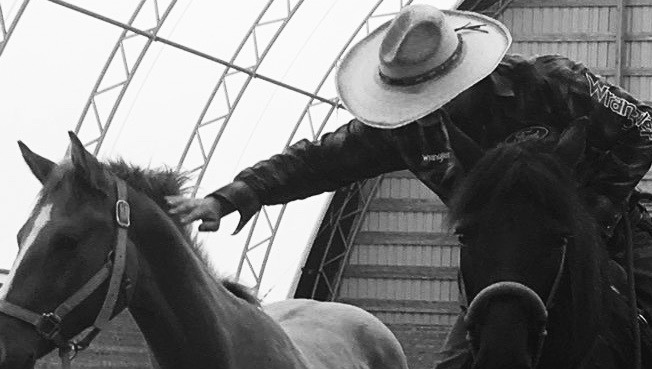 Styles of horsemanship, that is something I struggled with for many years, in this part of the world (Southwestern Ontario) when people talk about styles of horsemanship, they are usually making broad reference to either the “English or Western” style of riding.  In reality those two seemingly different styles, in these parts, are exactly the same – differentiated only by the choice of saddle and headstall.

In reality, horsemanship has nothing at all to do with a chosen sport or the discipline of the rider, horsemanship is transcendent, it crosses the boundaries between breeds of horse, types of gear used, as well as the expectations of a particular sport.  It took me a very long time to sort through what I was seeing at clinics, events, on videos and in books on horsemanship, to understand that there is only one type of horsemanship – whether you are trail riding, competing in dressage, running flags, chasing cows, or working cattle, horsemanship is horsemanship.  It is like a Zen paradox – “how can you taste of my tea, if your cup is always full?”. And, folks easily get so mindful of task completion, winning, placing or socializing on a casual trail ride, that their thoughts are far from thoughts of horsemanship.

I will digress and circle back for anyone sufficiently interested to follow me through my mental musing about my own journey.  Thinking back, I recall the first time I met Martin Black, in person, at the Golden Spike Arena in Ogden, UT, at what I believe turned out to be the last Buckaroo Gathering.  I had attended the event in the hope of meeting Martin and to fence sit the clinic he was putting on.  Martin had a booth set up to promote his horsemanship school and to sell gear, books, DVDs, tack, etc.  I caught up with him at his booth, where with his guidance, I bought a spade bit some other gear and a few books – I suppose, being such a loyal customer inspired Martin to give me a book as a bonus, I am not sure which book it was, but I do remember him telling me “If you read no other book you should read this one” as he handed me a copy of Ed Connell’s book “Hackamore Reinsman”.

I read the book, a small paperback with a total of 107 pages, on the flight back to Ontario.  I recall finding some points of inspiration but overall, my first impression was not the same as my later view after I started to learn more about horsemanship.  Until I ran into Martin, I had just been riding, working on the mechanics more than developing a deeper appreciation for the horse – I recall around the same time admiring a beautiful saddle, I had seen online, from Frecker’s Saddlery, the carving and tooling was truly a work of art.  I remember mentioning to friend that I would love to have such a saddle, but I felt that only a true horseman should have one, I said that “I wasn’t there yet”.  My friend commented that I was riding pretty good and should get one if I could afford it.  For me though it wasn’t about the money, it was symbolic, more about the prestige that goes with such adornment.

My pursuit to that point was mostly about figuring out how be light and soft with my hands, how to get the best responses from my horses without pulling, banging, or spurring them into compliance.  Things had improved a great deal since making the commitment to follow the path “Jaquima a Freno” – using the Jaquima helped, my hands were getting better and I was starting to dig deeper into understanding what made a horseman a horseman.  Tom Dorrance described riders as “surface workers” it is possible to be a great rider, in an arena, to win buckles and ribbons without being a horseman.  Some folks can get along O.K. with horses within the context of a discipline without ever understanding anything more than what they need for that particular purpose.

In my zeal to learn I started to engage with, and follow, folks who were on the same, or a similar, path through social media, facebook, YouTube and so on.  I made it a point, whenever possible, to try to meet, in person, with some of the folks I had met virtually through these platforms.  I remember feeling like a complete outsider as I followed their discussions, but as my understanding grew, things started to make sense, and I felt more and more at ease around some of the folks I had met and I could grasp concepts written in books much more readily.  I started to revisit Ed Connell and think more deeply about his instructions and ideas.  I read Tom Dorrance’s “True Unity” with renewed interest and purpose, all of a sudden, Ray Hunt made sense, he wasn’t just talking about getting soft with a horse and being the horse’s lawyer – he was a signpost on the journey, pointing the way.

I was struck by my friend Butch Mowdy, whom I initially met through Facebook, Butch is a huge Tom Dorrance follower, he had the opportunity to get around Tom a little and he has probably read every word ever written by, and about, Tom.  I am not sure Butch realizes how much he influenced my journey, initially I found inspiration in him signing of on his facebook videos by saying things like “keep it soft”, after all that was the most important thing to me, at that time.  I was fortunate enough to be invited to Butch’s place, in Idaho, to see what he was doing and to be enlightened by his methodology, and his progress with the young ones that he specializes in helping.  I am very proud to be able to call Butch a friend as well as a mentor and a great horseman.  Butch has never had an unkind word to say about any horseman, regardless of discipline.

In fact, it was Butch Mowdy, a former Vaquero, who suggested that I take another look at Dressage, a discipline I had been very dismissive of (largely because of its use of Rollkur) – and in particular the great Portuguese Master Nuno Oliveira.  As I checked out Nuno another door opened, I have watched this particular video clip, completely aghast with wonder and admiration, more times than I can count.  The viewer must be mindful of how small the arena is, that this is a student’s horse, and that Nuno had not ridden it a great deal prior to this video being made (not for promotional purposes).  I have analyzed this video many, many times, attentive to rein handling, the horse’s attitude, the use of the aids, the importance of leading with the hip and not the rein, the feel, timing and balance of horse and rider, and so much more.

Inhibited from what had become my annual pilgrimage to Martin Black clinics in Idaho and Texas, because of some damned cold virus, I took to studying videos and reading books, some over and over again.  And I started to notice common themes emitting from Martin Black, Gustav Steinbrecht, Ray Hunt, Nuno Oliveira, Tom Dorrance, François Robichon de La Guérinière, Buck Brannaman, Francois Robichon Baucher, Bill Dorrance, William Cavendish, the Duke of Newcastle.  When looked at from the perspective of style, goals, discipline or sport these men appear to have little or nothing in common, but when viewed from the perspective of “horsemanship” the connection becomes obvious.  Although separated by continents and even centuries, the student of the horse will find more commonality as one digs deeper, below the surface, than might readily be imagined.

My conclusion being, there are no styles of horsemanship, as Martin Black has often said “good horsemanship is good horsemanship” – I am finally ready for my Frecker’s saddle – albeit very much a beginner, I can now proudly say that I am a horseman – sadly Frecker’s are not ready for me, they have a long waiting list for custom saddles and few off the shelf opportunities.  But now as a I flip from author to author, I can see the thread, the things that each has learned from the horse.  That’s what makes a horseman a horseman, a horseman learns from the horse, not from the mechanical instruction they receive from other riders, rather they learn about such trivialities as “feel, timing and balance” – not just their own, the horse’s.  Now, when I read Nuno, I recognize Martin Black and I can see de La Guérinière smiling across four centuries, content that at least one other person has seen a light shining through the years.