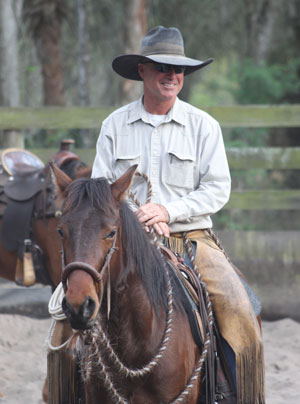 Spotting a good Jaquima horseman isn’t all that hard as you see more horses ridden with this set-up.  One of the key differences between someone who is experienced in using a Jaquima and one who is not is the amount of pulling they do with the bosal.

A rider accustomed to riding in a snaffle or ported bit will tend to pull and hold far more than the good jaquima horseman who will tend to use a series of small bumps to get the response he wants.

The horse’s head position can also be something of a gauge, not just of the use of the jaquima but the softness of the rider’s hands.  The horse’s ears should be higher than the withers on the jaquima as it prepares for the spade bit.

Arena riders who show in jaquima classes often have relatively little experience and allow the horse to drag it’s nose really close to the ground.

The whole purpose of the Jaquima is to build in lightness and softness, this prepares the horse for the light signal of the spade bit.