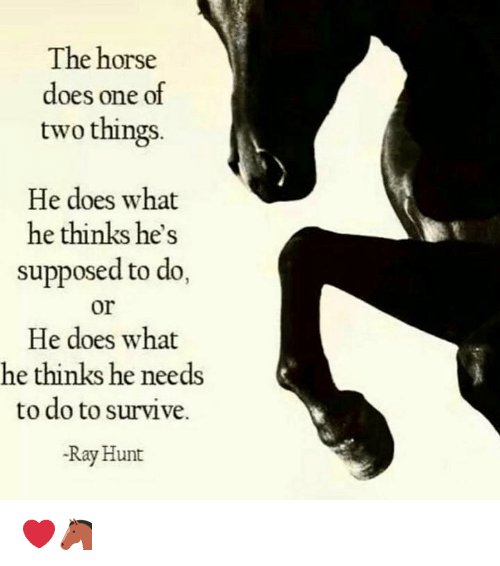 Now don’t get me wrong with that header, I’m not suggesting Ray’s “teachings” need to be rethought, but I am suggesting that some of our “interpretations” of Ray’s sayings certainly do.  The one that most comes to my mind is “the horse is always right”.   I firmly believe that Ray was correct in saying that, but I find for many folks it means “the horse can do no wrong”.

I never met Ray but I have met a number of people who have and I think they would agree that Ray didn’t mean to imply you should let the horse run the show.  Rather Ray was telling us that the horse will interpret what we do – how we cue it – and respond to that stimuli.  If the stimuli provided doesn’t elicit the desired response, it’s the stimuli that needs to change not the reaction.  The reaction was correct and in line with what the horse understood.

If the horse doesn’t understand your cue it because he’s being honest with you – he has no idea what you asked so he too a shot at it and interpreted your cue in the way he interpreted it.  If you have been around horses and horse people you would surely have seen someone having a bad day, yanking or spurring needlessly on a horse and you might have wondered “what the hell are you ask that poor creature to do?”.

We humans have the gift, or maybe the curse, of reason, we can think abstractly and if we can’t figure out what was going on you be sure the horse had no idea.  Horses don’t think the way we do, they are prey animals and have survived through their ability to quickly recognize danger and get the heck out of town.  Horses seek comfort and security and when we, predators, not only threaten to take either of those things away but proceed to impose ourselves on the horse, they look for a place to be, any place to be, where there’s comfort.

You ever notice that after a horse has bucked someone off, they settle down pretty quick and look for some grass to munch on?  That’s all they wanted, to be left alone.  They didn’t want, or plan, to buck the person off.  Now, over time, they may have learned that bucking someone off get’s them to homoeostasis more quickly than enduring being knocked and banged around for a while.  Was the bucking-horse right?  Yes, absolutely, that’s what he understood, but it wasn’t what you meant to ask.

Let’s take it back to another Ray Hunt saying, “you need to do less sooner, you’re always doing too much late”.  I’ll give a couple of examples; a friend was riding a horse around the outside of the arena and the horse kept dropping its shoulder and heading to the centre of the arena.  By the time the friend got to adjust the reins and offer a correcting signal the horse was three clear steps off the rail an into the middle of the arena.  In the other instance the horse just took the rider off to HQ, heading back to its pasture while the rider felt helplessly compelled to go along.

In both cases, the horse was right in its interpretation of the stimuli – basically none, certainly none at the appropriate time.  In the first case the horse was looking to go stand in the middle of the arena, perhaps because when the rider was socializing with other riders that’s where they’d hang out.  The rider allowed the first few steps to occur uninterrupted then came in strongly, to the horse’s surprise and, by then, objection.  The problem was solved very easily by allowing the horse to start making the mistake and at the very beginning intervening with a light bump on the outside rein, just to remind the horse that was not where it should go.

The other case was a far more ingrained response where the horse had become accustomed to running the show, eating whenever it wanted during trail rides, stopping when it was bored and heading home when it had enough.  The rider was providing absolutely no leadership and the horse truly felt it ought to be able to do whatever it wanted.  This is a classic example of the wrongheadedness of believing “the horse is always right” – as it surely was.

The problem was solved after a few failed attempts by the horse to get where it wanted to be, when it wanted to be there.  Simply blocking the horse from turning its head back towards the barn or pasture, making that decision uncomfortable, convinced the horse that if it went where it was pointed there was more comfort.  Once the horse was able to understand what was being asked of it and recognized that there was more comfort in following the cue the problem was solved.

In neither case was the horse exposed to harsh treatment, rather in both cases timing and clarity were the most important communication tools.  At the end of the exercise and in the examples given the horse was right, it was able to understand and interpret what was being asked in a way that worked for both the horse and the rider.  But the important thing is that each situation was set up to give the horse clear and timely information allowing it to make its own decision.