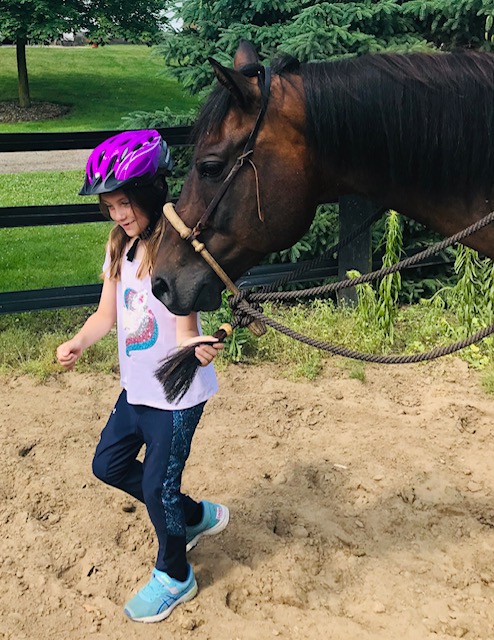 Actually, it’s all about the small stuff, no matter where you are at in training your horse(s).  If you watch horses communicating with each other in the pasture, most of the conversation is small and subtle, a glance, a twitch of an ear, a nod of a head.  All of these signs come long before the dramatic kicking matches.

If you let your horse get away with small things, he’ll up the ante and, before you know it, those things will become bigger and more problematic.  Now I’m not suggesting micro-management but rather measured and methodical follow up to some of the small stuff that often gets ignored.  Your horse stepping into your space for instance, of it’s so cute when they frisk you to check for carrots or other treats.  Well it is until your horse is running you over and has become a danger to you or other people.

Correcting that type of behaviour early takes less effort and with consistent follow through it can easily be overcome before it becomes problematic.  The same idea holds with ground tying – at first your horse is going to want to walk off, then shuffle its feet, but by methodically and patiently putting it back where you want it to stand the horse soon gets the idea and will learn to stand quietly.

When your horse drops its shoulder to the inside, do you throw up your hands and go back to repeat the circle and try to hold your horse up, or do you develop a strategy for dealing with the problem of anticipation (expectation)?  If you can develop enough feel to where you can feel the horse starting to prepare to drop in you might ask, at that very moment, for the horse to move to the outside, even one step.  As with most everything else we do with horses, timing is the key to them understanding what you are asking.

Let’s go back to the first paragraph, horses rarely, if ever, just run over and start booting each other.  There is a discourse that transpires quite in advance of that.  If you wait until your horse has dropped in before trying to lift him back out of the circle, he will be very heavy and probably will have no idea what the problem was.  But if you can catch him right at the thought of dropping in, as soon as he begins the motion it will be clear to him what was going on.  After you have caught the right timing a few times the horse will change and stop running into a correction.

You need not be hard or harsh, but you must be firm enough that the message is conveyed clearly yet soft enough not to be offensive to the horse.  As long as he is doing what you asked, make sure you leave him alone – that’s his best reward.  Whenever you get a change or response that lines up with your expectation leave him alone.  Too often people keep knocking on them or ask again right away just to see if the horse really understood and that just leads to confusion.

If you are getting frustrated with your horse because of something he does, ask yourself how he’s feeling.  Did he understand what you were asking?  Did you set it up so he could find the right answer? Did you reward him when he responded correctly?  Did you allow him time to think about what just happened?