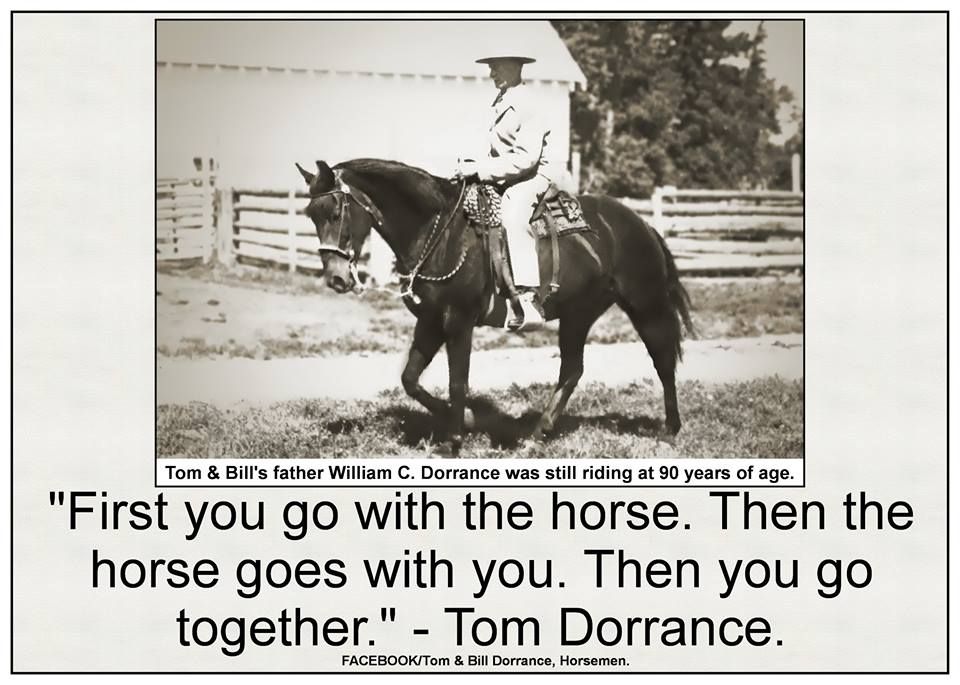 When you are starting a horse (young or old) it doesn’t understand much of what you are hoping or asking for, so it’s unfair to be too critical.  Allow the horse some time to explore and find its way through and out of the situation.  Pulling and spurring to get what you want will lead to confusion and often a bad reaction from the startled or annoyed animal.  Instead of trying to force it, try going with the horse.

Regardless of their age, when starting one, get them moving forward as soon as they are accepting of a rider, but it doesn’t matter where they go as long as its forward.  They can wander around all over the sand ring – just keep the feet moving, if they stall tap their butt, with the spanker on the end of the  mecate or the end of a rein, it’s best to minimize leg aids at this stage.

Once the horse is feeling comfortable, moving out with a rider on its back, we might start to ask it to follow some direction – this is accomplished by lightly picking up the reins and bumping it in the direction the rider wants it to go.  If the horse gives only one step that’s O.K. at this point, remember don’t be too critical.  The reward is to leave them alone after they have followed that feel, maybe half the way around the arena before asking again.  Try to time the ask with the position of their feet, so start asking just before the foot is leaving the ground.

Every time you give the horse a signal and it does something closely approximating what you were asking for immediately leave it alone, that’s the reward.  You might ask again but allow it a little while to think about what just happened.   Too often, folks either get excited, because either they were impressed with what they got, or because it wasn’t to good and they think the next one will be even better.  If you do get something, however close to what you were asking for, just leave it at that, maybe stop and let the horse just think about what happened for a minute.  Don’t drill on the horse by repeatedly asking it to the same thing.

If, at this stage of development, we get too critical and demand more, we risk building resistance into the horse, they may get resentful of being pressured with no obvious way out.  It’s better to allow them some freedom to get accustomed to the weight, movement and balance of a person sitting on their back before we start expecting precision in any measure.  The idea is to make going somewhere, anywhere, their idea without resistance.  Gradually we can introduce more directions, turn this way, slow down, stop and so forth, but the first priority is to get the horse to accepting the rider and moving out.  Just go with the horse.