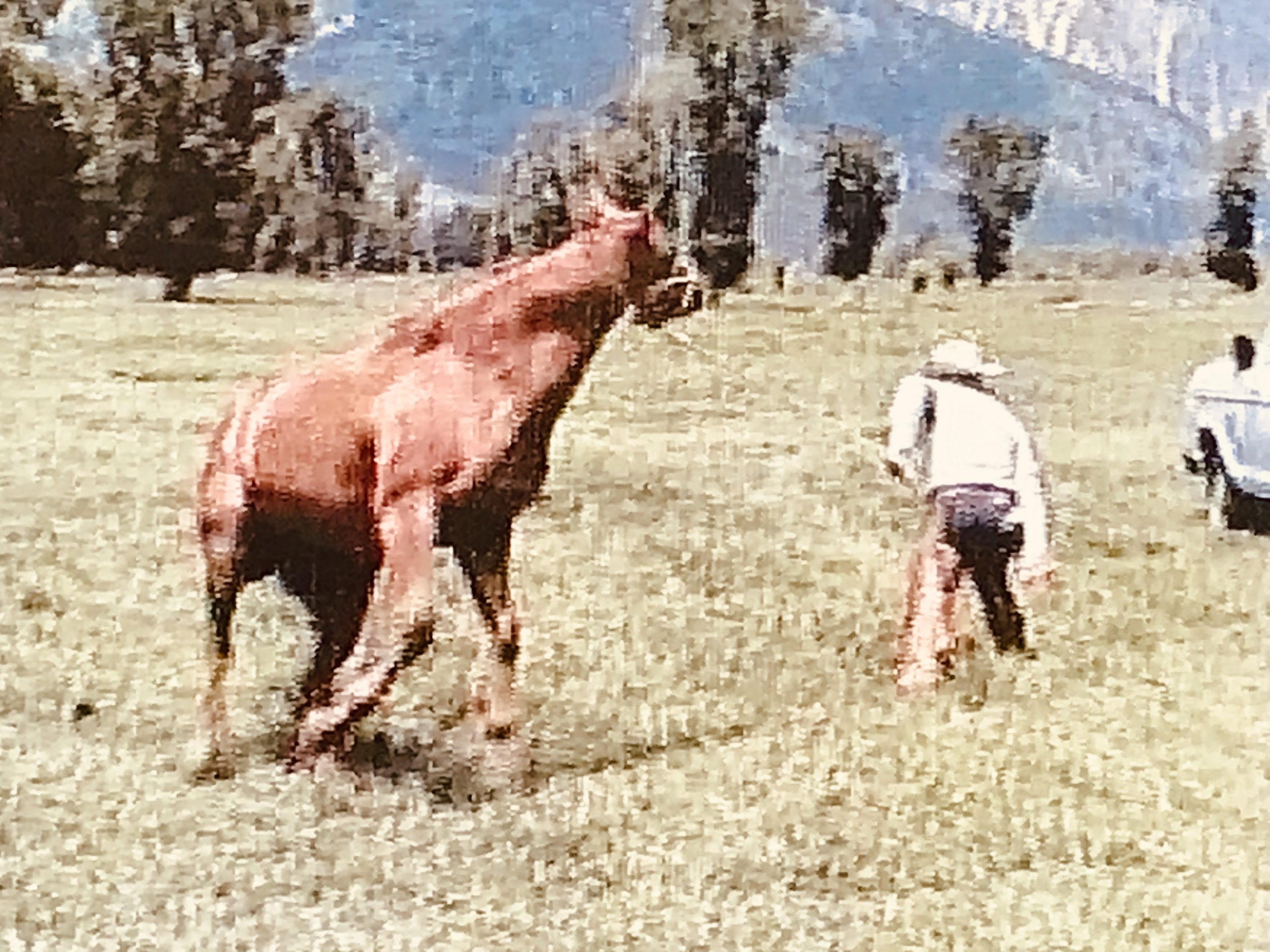 In his book, Hackamore Reinsman, Ed Connell talks about the process of doubling a horse, but his description is a little fragmented and perhaps even vague.  Ed says that they “should be pulled on foot before they are ridden”.   He goes on to say, “they should be turned around completely”.  There are several paragraphs about the doubling process, in Ed’s book, but they are not completely instructional.

I have watched a number of horsemen and riders explain doubling in their books and videos and there seem to be almost as many interpretations as there are riders.  So, in this blog I will discuss my understanding and interpretation, for better or for worse.  The picture is of Ray Hunt doubling a horse from the ground in a trailer loading demonstration from his video “Turning Loose”.  As can be seen in the picture, Ray had set himself, as an anchor, prior to the horse running into the end of the lead rope and forcing himself to turn.

Doubling is a process that colts or green horses should be exposed to, as Ed says, “before they are ridden”.  He also talks about them being doubled from the back of another horse before being doubled by the rider.  The objective, as I understand it, is to get the horse to turn around (change direction) completely following a feel from his nose down to his feet, completely untracking his hind as he turns fully around.

It is important that he not brace against the pull, he must turn not only his feet, or only his nose, but he must turn by bending his whole body, starting at the nose on to the poll, down to the loin and through to the feet.  He must not just be jerked around, the movement should be fluid, he shouldn’t be spooked at the pull, he has to feel himself running into the halter, or Jaquima, and give loosely down through his body.  Now that is not to say that it’s wrong to spook a lazy horse into running down the fence before being pulled, but the idea is not to mug him with the pull.

If he doesn’t give at the poll, he wasn’t pulled properly, and he may become resentful (bracey) and start anticipating, if not properly timed or if there is too little slack in the lead rope.  There should be no tension in the lead (rein) until the horse runs into it, creating a sense that he did this to himself.  The process should be started slowly and if done thoroughly enough it will work smoothly at different gaits and it doesn’t need to get too rough.

When the horse feels himself coming to the end of the line he should be thinking about where his feet are going, preparing himself to follow a feel.  The idea is not just to put the horse in a bind or create a wreck, but to develop the idea in his mind that when the rein gets suddenly tight, he can create slack by changing the position of his feet.  In fact, Ed Connell, said the colt should see the rider’s hand out to the side on a slack rein before the pull, and that helps prepare him.

Doubling is helpful for the rider in a variety of situations.  By bending through the poll down into the loin and on to the feet, he untracks and is unable to use the power of his hind to run off or to buck.  The same principle is also used to turn a horse on the hind, and this must be timed with the positioning of his feet at the time of the pull.

One might see a rider trying to turn a horse when the horse’s feet are in the wrong position.  If a horse is pulled to turn to the left and his left foot is planted, he will have to step across with the right before the left can move.  If the pull is initiated just as the right is hitting the ground, and the left is leaving for the next step, the left can easily follow the rein cue into the turn.  Similarly in setting up the doubling, it is helpful to be mindful of whch is to be the pivot foot.

Doubling is not about holding the horse’s head around, I think of those horses as boot lickers, the horse needs to come around of his own accord.  The boot lickers are held there, nose to boot, usually by an anxious rider hoping to prevent a wreck, but in many ways just postponing the inevitable, if the horse is in that frame of mind.  A horse can lick a boot in a stirrup without giving at the poll or the loin and still having its body braced read to buck as soon as it is released.

Doubling, done properly, will teach the colt to follow a cue from the rein.  If you are pulling his head around and his poll and loin are not bending and initiating a movement of his feet it is doubtful he will untrack and if you slack the rein, having a straight spine, he might get right back to bucking or running off.  Some folks pull their nose down and by the shoulder to the stirrup, but without the poll yielding the loin will not bend, untracking the horse.  Done properly, one pull should be enough to transmit a signal all the way through his body.  As with anything else the horse does for you, he should meet a slack rein as a reward for his efforts.

4.     4.    When doubling or pulling, give him one big hard pull and slack on a short rein, and pull when his front feet are off the ground.

If your horse can be easily doubled, he should be pretty safe to ride outside the arena, but keep in mind Ed’s other points above.