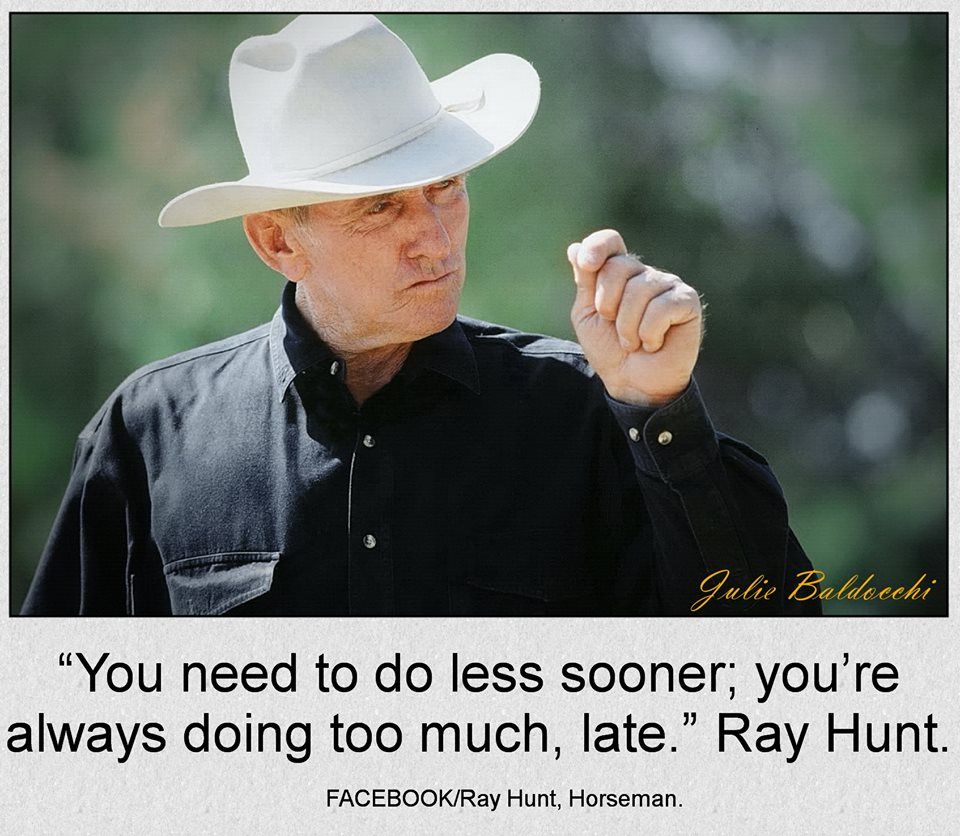 “You need to do less sooner, you are always doing too much late” – Ray Hunt

That little saying may seem obvious to some, but it is far more challenging than you might imagine.  Horses and humans don’t think along the same lines at all.  Horses have no conception of time, humans live and die by the clock.  We ae always in a rush to get something done, but the horse, well he can wait – after all what else has he got going on?

A friend was having trouble keeping her horse on the outside of the arena at the lope, it would come halfway down the wall and then drop its shoulder and duck into the middle where it would stop.  She was getting frustrated (or “flusterated” as Ray Hunt might say) and would try to over correct the behaviour in the hope the horse would get it and stay on the wall.

I asked if I could try riding the horse and had no trouble keeping it straight down into the corners.  Now, I really don’t mean this as a brag, just a different approach using less sooner.  The difference being that as soon as the horse would make the slightest gesture of its intent to move off the wall, I would bump it very lightly with my outside rein to keep it straight.  After a few tries the horse figured it wasn’t worth the aggravation.

My friend by contrast would “allow the horse to make the mistake” and after it had fallen three or more strides off the wall she would correct it back.  The problem was that by then the horse was far more committed to getting into the middle of the arena where it could stop and hang out, albeit for a short term.  She had to do far more work with much more effort to get the horse back on track.  My approach was to get in the way of the mistake so that it might not happen.

If you can set things up for success, by envisioning what you are looking for, and follow that through to anticipate and pre-correct the error you will start to get more done with less effort.