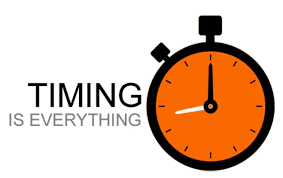 Developing timing is something anyone can do, if they work at it.  To get better at timing you have to be aware of what it is as well as why it is important.  So, let’s start with why it’s important, in psychology there are basically two types of conditioning that are commonly referred to, “operant conditioning” whereby a behaviour is directly rewarded or punished and “classical conditioning” in which a behaviour is coerced by using a non-related stimulus.  Both can play a role in what you do with your horses, but in either case timing remains important.

The best example of classical conditioning is the well-known story of Pavlov’s dog – Pavlov would ring a bell (non-related stimulus) and then feed his dog a treat, after a while the dog would start to salivate and drool upon hearing the bell ring.  In the world of horses you might open a bin in the nearby feed room and your horse will start to shuffle his feet, raise his head and get agitated in anticipation of getting some grain.

Operant conditioning is where a stimulus is more directly linked to a particular behaviour, you crack the whip and the horse gets moving, knowing that the next crack will probably be on his butt.  Operant conditioning doesn’t need to be harsh it also works well with a reward, after a desired behaviour is elicited the horse gets a reward – most people anthropomorphize the reward and think of carrots or treats as the reward.  But for the horse a release from pressure (being left alone) is more powerful and far more accessible, wherever you happen to be.

Regardless of whether we use the classical or operant conditioning approach there must be a link between the stimulus and the response.  If Pavlov rang his bell and didn’t give the dog a treat until the next week the training would be completely ineffective.  Similarly, if you crack the whip for the horse to move and don’t crack it on its butt for ten minutes the horse will not make an association between the stimulus and desired response.

One day I walked into the arena and saw an angry and frustrated woman smacking her horse with riding crop.  I didn’t like what I saw and said, “looks like someone is having a bad day” she tearfully turned to me and said her horse “started bucking” and she enough of the mare’s behaviour.  But here’s how that scenario played out: first, the horse crow hopped, undoubtedly out of frustration with the rider, the rider, who never carried a crop, got mad, jumped off the horse ran across the arena to locate a crop and returned to take her anger and frustration out on the horse.  From the horse’s point of view, it had absolutely no idea why is was getting a whooping, the time between the two events was too great for the horse to make an association.  On the other hand had she had the cop in hand and gave the horse a smack (although I don’t believe that is the proper way to solve the problem) instantly as soon as it misbehaved it could have made an association between what it did and what happened to it.

I believe it was Tom Dorrance who said, “you are always doing too much too late, you need to do less sooner”.  That statement is true for most of the riders, their timing is too far away from the behaviour for the horse to make an association between the two events, so they do more, and often out of frustration.  Humans have an innate disposition to monitor and control every situation in their lives, perhaps it’s how we survived throughout the ages.  But we get along better with other beings when we understand and respect their nature and perhaps nowhere is this more evident than in the world of horsemanship.  Horses do not think the way do – you’ll hear it all the time, they don’t plan to buck you off, they don’t think about you all day, in fact no matter how good you think your relationship is with your horse they probably could care less if you ever showed up again.  Oh, sure they may be happy to see you because they associate your appearance with a carrot, or some exercise and a change of scenery but it’s not you, the carrot or the exercise they are thinking about when you aren’t around.

Horses are masters at recognizing patterns and following routines, which is why when you do show up, they have a pretty good idea of what will happen next. Your horse may have been standing around all day just hanging out but when he sees you show up, he associates your appearance with something else, like Pavlov’s dog.  It might be, “here we go, she’s here, she’s going to chase me around the pasture for a while, see yah!” or perhaps, they may think, “here comes the carrot lady”, or “this is going to be a pleasant experience”.  All are examples of classical conditioning.

When you are riding your horse and ask him to do something if you reward the very slightest attempt to do the right thing by dropping the reins (cue) and letting him be, he will soon learn that what he did gets him relief and he will be inclined to repeat that behaviour more readily.  But he must make a direct association between the ask and the reward – so the release (the relief) must be timed as close as possible to his response to the stimulus.

Here’s an example you pick up a direct rein to ask for a left turn, do not pull the rein (that is rude to the horse and will likely teach him to pull back to get relief) just lightly pick it up putting a small amount of tension in it and wait for a response, you may have to wait for a while, but as soon as the horse responds by moving its feet to the left drop the rein.  That is stage one of three stages of timing.  Once the horse starts to understand the “feel” in the rein, and responds more readily by moving his feet, you should try to drop the rein even more quickly.  This is you starting to get in time with the horse.  At first you pick up a feel and then the horse responds then you drop the rein, then try to release more quickly so that instead of dropping the rein after the horse has moved his feet you drop it as he starts to move his feet, if you keep working with this idea you can get lighter (and so will the horse) with your cue and release even before he starts to move his feet (basically as soon as he starts to think about it).  Tom Dorrance said something to the effect of want to know “what happened before the thing that happened, happened”.  That’s feel and timing.